Infinitas was founded back in 2009 in Muotathal, Switzerland. They’ve reached one of their biggest success yet in 2018 when their single, Skylla make it into the Swiss Charts and reached 19th place for two weeks and first place into Radio Sunshine Hörercharts. The band also supported Eluveitie at their album release show in 2019, and sharing stages with such names as Alestorm, Butcher Babies and Burning Witches have also been further highlights. Combining several different styles of metal underlaid with folk violin and multitalented woman vocals gives Infinitas’ music a unique touch.

The band has a very special story concept which runs like a thread through their songs and albums. A story of a middle-aged world in which demons rule over the good and bad. Through their debut album Civitas Interitus (2017), Infinitas gives the listener a deep insight into the fantasy world of Lunatris and leads them through a tale of the demon-possessed city. And this time we had an opportunity to do an interview with the band’s violinist, Savannah. 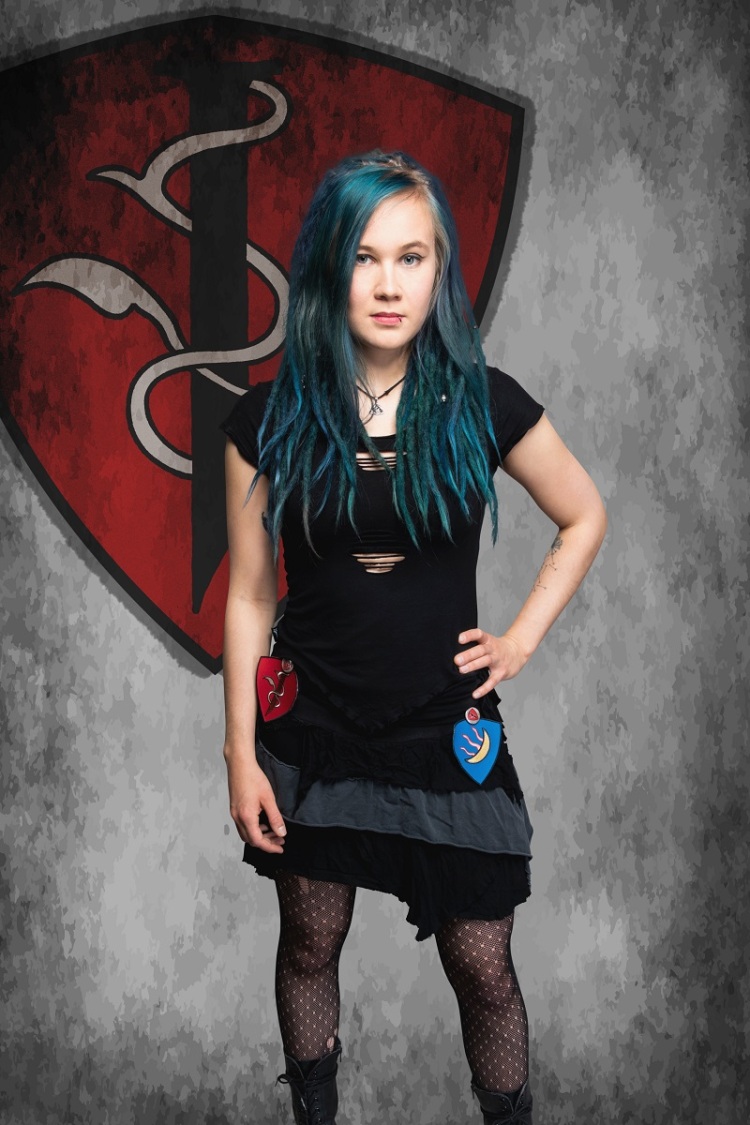 “I personally made that decision (that she wants to be a musician – editor’s note) when I was 5 years old when I told my parents I wanted to play the violin. I had to wait until I was 9 years old until I actually got to start, but until then my dad gave me my first music lessons on the guitar. We sang a lot of country and folk songs together and even wrote some pretty amusing songs. At the age of 9, I started to take violin lessons and focused on classical music for the next 8 years until I was finished with school and wanted to take my instrument into different music genres. I had always been into punk and metal so that’s where it took me to where I am now. I recently decided to make music a greater part of my life by learning to become a violin maker. Being a musician definitively helps me on the job and you can connect well with other musicians.”

“My main inspiration to do music is to create a place in time where other people can feel safe and be themselves – myself included. A place for any kind of emotions and stories. This really motivates me. As in bands that inspire me…that’s always a tough one! There are many folk singers I grew up with such as Woody Guthrie and Bob Dylan that have definitely contributed to the person I am today. Looking into the metal scene I would have to go with Ne Obliviscaris – there are some amazing compositions in there, and Tim Charles has a really unique way of combining his violin into it. Other bands are Insomnium, Igorrr, Architects, Alcest, Eluveitie, Gojira, Tool…. yeah, I could go on and on.” 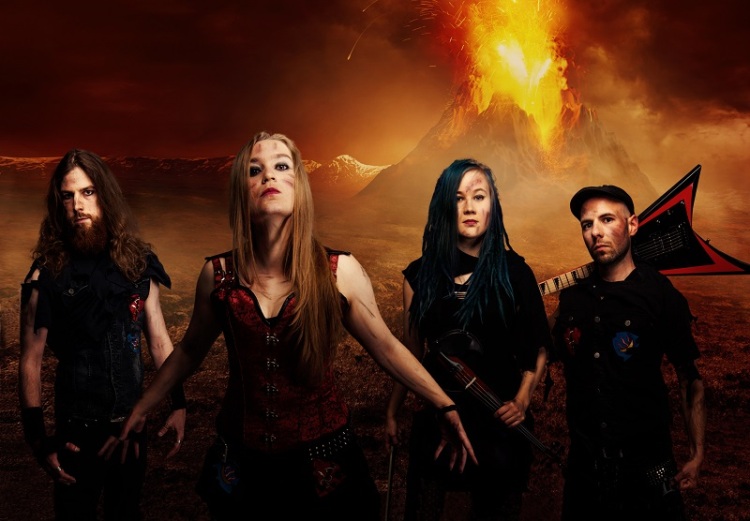 “I started playing with Infinitas just about a year ago so it hasn’t been that long actually. But for the last 4 years or so they contacted me every year asking if I was interested in playing with them. I really wanted to but the band was just way too far away for me to fit it into my schedule and I was pretty busy with other bands. Then the time came where I moved even further away from them and for some reason, it just fit then with what I was doing. Something clicked and I was like: ‘Fuck it – there’s a whole mountain range between us and it’ll take me 3 hours each way to get to band practice…but I’m going to make it work.’ And guess what – it does! And I met some amazing people along the way. Sometimes you just know when you got to do something – no matter what’s in your way.”

“Our guitar player Selv write all the songs. He’ll have these melodies in his head and write out the guitar and violin melodies. Sometimes I’ll change things a little bit – but his compositions are pretty set in his head and that’s better that way. It all comes together as one. After that, he looks at the drums with Piri our drum player. Lyrics are written by Andrea our singer, but Selv and Piri also write some lyrics.  Of course, having a band isn’t only just music. We do all the management and booking ourselves, for example, we are taking care of our finances and production as well – all these tasks are distributed in different amounts between us. Depending on how much capacity we have.” 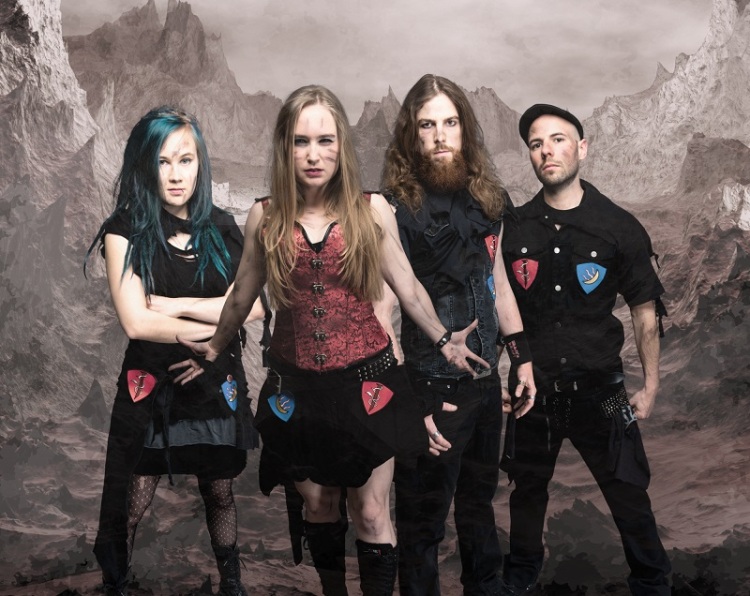 “There’s a lot behind the song Amon. Its main focus is on the lyrics in the chorus: ‘One second in heaven forever in hell.’ This song is about situations in life that appear to be beautiful and wonderful from the outside but are pure hell once we are in them. For example, a high ranked job where you always have enough money around or the perfect way somebody might present themselves on social media – these things look like the perfect life from the outside. But often we don’t see the inside lives of the people living them. They usually aren’t as glamorous and worry-free, as we think. We even made a short documentary on the song – so if you’re interested, go ahead and check it out on our YouTube channel!”

New album on the horizon:

“We follow a concept throughout our music and it tells a story. Our first album from 2017, Civitas Interitus tells the story of a medieval city that gets destroyed by demons. There is one survivor and he is then forced to flee from his home and everything he knows. This is when it becomes interesting:  there are three different outcomes of how he lives his life after such a traumatic experience. Either he created his own personal hell and lives life in negativity. Mourning for his loss and his fallen city. This was what our latest album Infernum is about. The protagonist of the story can also look upon life with hope and positive thoughts and look forward to all the new things coming his way. This will be his own personal heaven. And for a third release, he can live life in a balanced way with ups and downs and just live in the moment. That would be the Earth. The next two albums will tell the story of the last two outcomes – Earth and Heaven.

You can expect an ongoing story throughout our next releases and we’ll be connecting our live performances with this as well.”

Travelling back in time:

“I think about this a lot actually and I’ve never really come to a decision. I think this might have to do that I just really want to make the most out of the present – because as fucked up as today’s world can be – we’re here to live it and make it better. But back to your question… Maybe back to when my grandma was a kid – so beginning 1900s. I’d like to experience how it was growing up back then and seeing how fast the world around you can change. Technology, music and a shift in society. I’ve grown up in a pretty safe and nice environment with enough to eat, a place to sleep and the choice to actually have the education I would like. These are all things that my grandparents didn’t always have and the majority of the population still don’t have. Going back in time would probably let me appreciate this even more. “

Please support the band by buying their music – just click on the photo below.