From Ashes Reborn is a melodic death metal band from Germany. When I heard them for the first time, they immediately stole my heart. The melodic and heavy riffs, the killer vocals… all these stuff will bring you the other dimension. Their goal is making timeless and interesting music, develop their songwriting, and have fun to play metal either for themselves or for people who like it. Thomas, the drummer of From Ashes Reborn shared their story to us.

Thomas, and the guitarist, Dirk have met in school 30 years ago and they have been performing together since they are 14. “Together we founded a band called BADOC which Sebastian, our 2nd guitarist, and Tobias, the bassist joined. After BADOC split up in 2016, we decided to form a new band with a new singer. It took until 2017 that we found a new voice with Ronny. 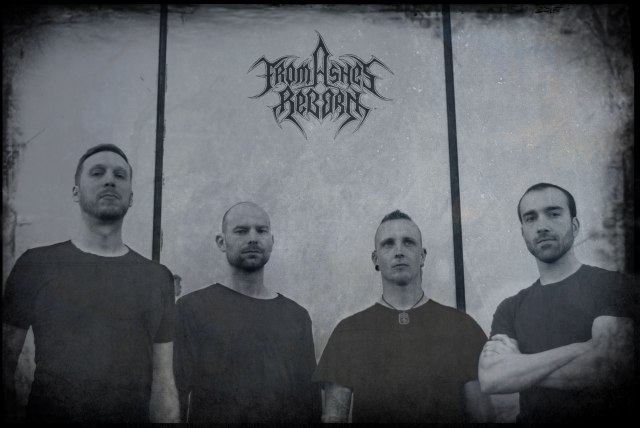 From Ashes Reborn is our creative outlet, but even more, it´s a matter of friendship and a blessing to have the opportunity to work with these guys for so many years.

We actually have a very diversified mix of influences, ranging from old Dissection, In Flames, Dark Tranquillity, Kataklysm to more new bands like Fleshgod Apocalypse or Der Weg Einer Freiheit. But there also bands like Cannibal Corpse, Dimmu Borgir, Arch Enemy, Cradle of Filth, Trivium, Kreator or Dark Funeral that are influential for us in a way. We still have an ear on the underground and are permanently listening and digging for new stuff.

We have worked out a good routine to create new songs. Typically, our guitarists write a song or at least elements and fragments of a song, which is then completed or enriched by the other one.

After this, I compose the drum parts. After all that is done, the lyrics are created and the vocals lines are written. Then there is typically a process of 2-3 months, where the song gets finetuned until it reaches its final stage. In all process steps, we have kind of a democratic principal and everyone is allowed to provide feedback or ideas, while the main songwriter typically has the last word or makes the decision.”

Well, I’m not sure if I’m alone or not, but when I saw the cover of their debut album, called Existence Exiled, I thought that they had some literary influences during their working process, because it reminded me of Angmar from the Lord of the Rings trilogies. But I was wrong.

“There was absolutely no intention to refer to any kind of literature. In fact, we gave the cover designer Chris Cold, an awesome and talented designer from LA, a briefing about the concept of our title track, ‘Existence Exiled’. In a couple of iterations, he crafted the stunning artwork. But I think I know where you are coming from –